Alisha and me as Buddy Cops! You… you wouldn’t want to get on her bad side- 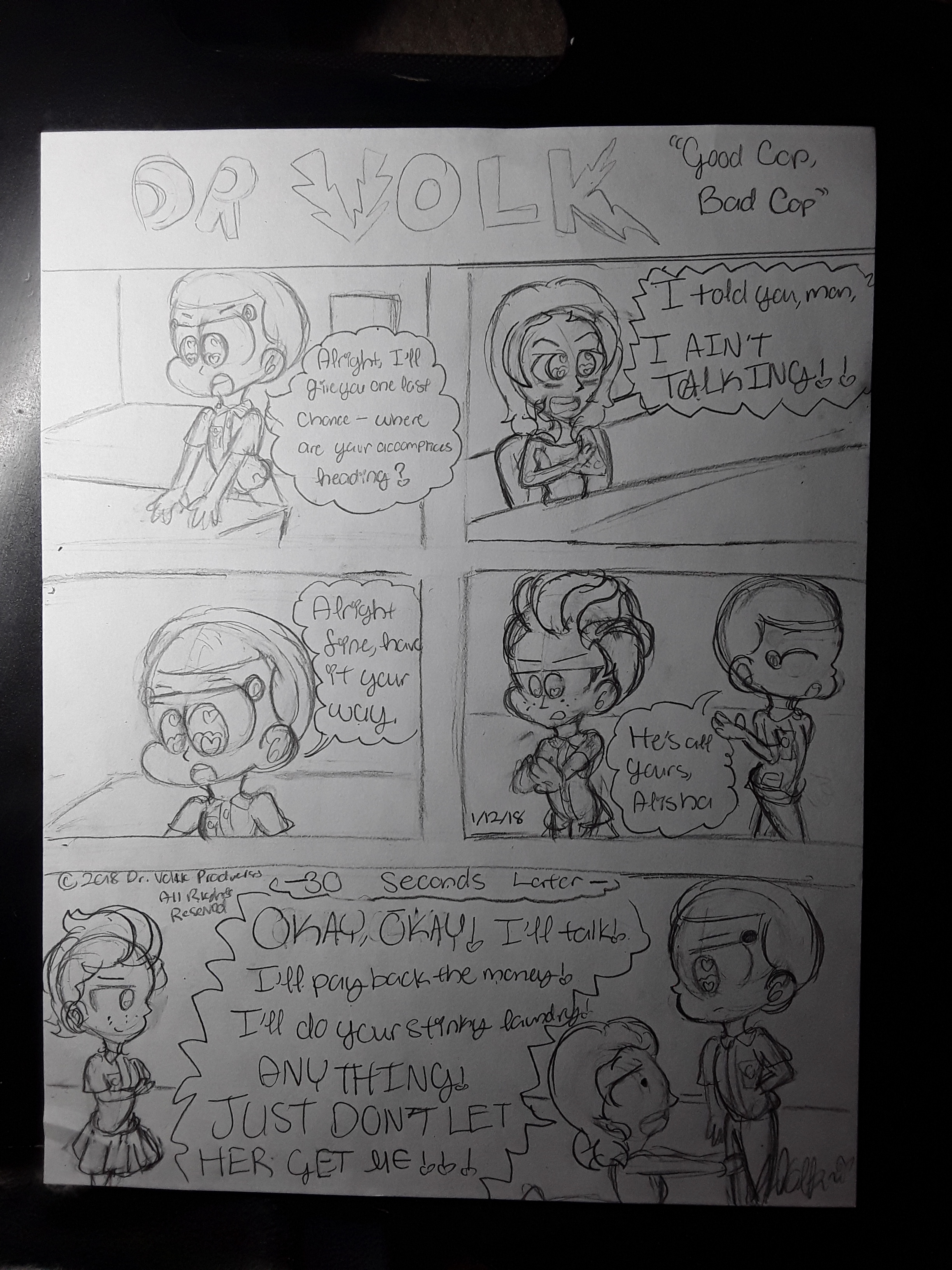 Panel 1: Dr. Volk: Alright, I’ll give you one last chance—where are your accomplices heading?

Panel 3: Dr. Volk: Alright fine, have it your way

Panel 5: Xander: OKAY, OKAY! I’ll talk! I’ll pay back the money! I’ll do your stinky laundry! ANYTHING! JUST DON’T LET HER GET ME!!!

It ended a long time ago

Haven’t done one of these in a long time

This… is literally all of my friends

Panel 2: Me: Now I can enjoy this juicy banana!

Final Panel: Me: Why are all of my friends such perverts?!

MY VERY FIRST DIGITAL COMIC!!! Starring another random unnamed character~ I’m so proud of myself… but you’re probably asking “Volk, oh wise and powerful, (okay maybe not that second part lol) what does this mean?”

So me and my friend Re-juvenate on deviantART talk occassionally, and somehow, the same issue keeps popping up throughout our conversations – girl chests. Alexa (Re-juvenate) has a very strong hatred against the taboo on girls’ chests having to be covered up in public, while men don’t have to do it to their own chests, and she strongly believes sexism is the reason this is so. Now while I’m not entirely sure about the reasoning behind it, she makes a very valid point – what is the difference? They’re practically the same thing, aside from an elevation difference and function difference.
While this isn’t enough to make me feel comfortable looking at girl chests (I still try to look away if ever an image slips by on the horrible World Wide Web), it is enough to convince me to ask… why the heck are girl chests so sensitive in public? Personally, I think it’s because many women don’t like people looking at them, and will call them perverts if they do, hence why society was like “Okay then, now it’s illegal! Are you happy now?” Even so… the point still remains valid. Plus not to mention the fact that every baby who has been breastfed has seen one before, and now they suddenly are never allowed to see one again once they’re able to walk? That’s the power of logic, everyone!

It is once again the return of the dreaded “double standard”, a cruel, cruel infestation that has plagued this land since the ancient times. It’s effects? A group of people can do one thing and be just fine, whilst another group can do the same thing and be punished, by no valid legal standing. Such as women having certain advantages over men, and vice versa, with a standard based solely on racial or wealth status. Truly, it is a system we must do away with if we are to be truly equal.

New comic at last! This is a remake of an old unfinished/unposted comic I made a while back… I may post it later here as an exclusive Unnamed Girl: …And that, is the true meaning of love.

Volk: Oh thank you! I’ve been wondering they for quite some time.

Unnamed Girl: No Volk, it’s too dangerous. You stay here.

Volk: TOO DANGEROUS?! I have fought intergalactic terrorists, in wars far more advanced than your pathetic Earth weapons! How could it possibly be too dan- AHH, SPIDER *zaps the spider with lightning*

You’re embarrassing him in front of his love~

Chatting with my 4th period teacher while she was grading papers.. some people just don’t even try-

-TRANSLATION FOR THOSE WHO CAN’T SEE-

Panel I: Teacher is grading papers at her desk
Panel II: Paper shows clear instructions on what to write, but student simply put “Uno, dos, tres, cuatro”
Panel III: Teacher thought bubble: Why do I even bother…

The story of my life in a nutshell ;v;

When you finally do something you’re proud of, and your friend instantly shows you up- *cries*

Btw i can only play piano with one hand at a time, so that’s another reason why I felt bad haha

This comic is based on a true story lol

♡TRANSLATION FOR THOSE WHO CAN’T READ MY HANDWRITING♡

Premise: A chibi me is sitting at a keyboard

Panel I: Me: Finally! I can play the Alex Kidd theme on my keyboard! I feel so accomplished!

Panel III: *shows me smiling with tears in front of ashes in a fire*
Footnote to fire – smoldering remains of keyboard + hopes & dreams

I belong to myself lol

FRIEND is a placeholder so just insert anyone haha

Please, no one word comments
The only reason for this is because I worked so hard on this comic… and… well if only one word can possibly describe it then.. then obviously I need to stop making these comics, ya know..?
Kind, constructive comments added along with the wonderful favorites you give me would be wonderful!

TRANSLATION FOR THOSE WHO CAN’T READ IT:

Madison and Johnathan are looking at something lustfully.
Madison: Mmm.. what a yummy-looking pie~
Johnathan: Yeah… it’s taking all of me to keep from eating it right now

Please, refrain from posting one word comments
Comments in addition to the wonderful favorites given are appreciated very much!! Please commenttt!!  I worked so hard to make this just right… Nice comments are the best like wow.
Rude comments will NOT be tolerated

Hey guys! Just recently made a thing with Aurora and Volk just rocking out on their instruments hahah

Volk and Aurora belong to moi~

Made with ♥ Manga Creator: Rebels page.2 ♥ , created by Rinmaru

Time and Relative Distance on Site

My First Drawing Video: How To Draw Madison Nyaire

We Have A Dream